So many crustaceans are killed every year, that the amount is - offensively - measured in tons, rather than individual numbers.

Crustaceans include animals such as crabs, lobsters, crayfish, shrimps, prawns and krill. Sadly, the suffering of crustaceans is consistently ignored and is on the increase due to the horrific “seafood” industry around the world.

As proof of the blatent denial of their sentience, those killed are not counted individually, but they are measured in tons. Shockingly, around 11 million tons of crustaceans are killed every year. Prawns and shrimp account for 60% of this global figure.

Crustaceans suffer extreme cruelty. Many have their legs or abdomens ripped off or are thrown into boiling water - all while still alive.

Scientists have proven that crabs and other crustaceans do feel pain, and are able to recall an unpleasant experience and take action to avoid it happening again.

Prawns & shrimp are caught by the ‘drag-netting’ method and are almost always beheaded and boiled alive, then pealed prior to sale.

Prawn anatomy is such that the place where their optic nerve connects to their brain, is also where reproduction is controlled. 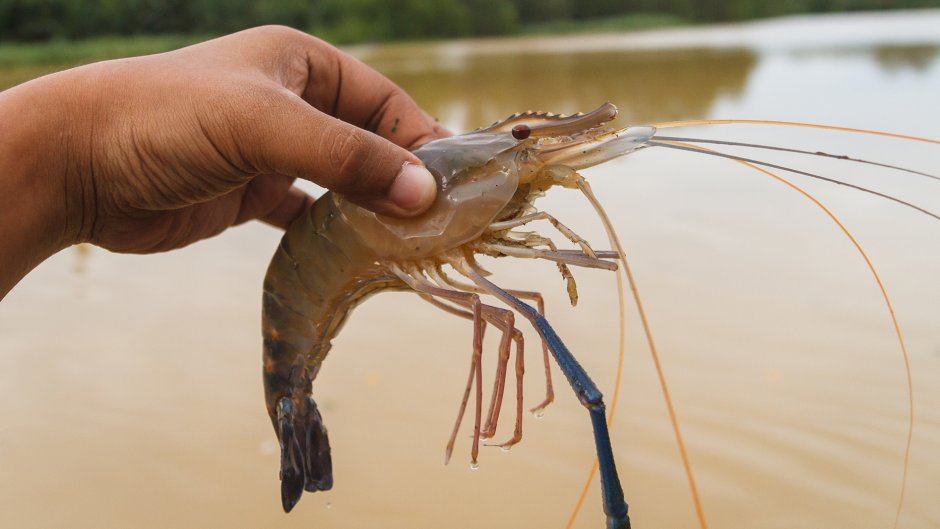 Eyestalk ablation is the removal of one (unilateral) or both (bilateral) eyestalks from a crustacean. It is routinely practiced on female shrimps (or prawns) in almost every marine shrimp maturation or reproduction facility in the world, both research and commercial. This procedure triggers the maturing of their ovaries. As a result, they have no control over their egg production and so produce eggs uncontrollably.

This horrific procedure is sometimes carried out by using a razor blade, but the main method used is to simply remove the eyestalk by hand.

Scientists describe this process as cruel and traumatic. It is known that crustaceans have the appropriate physical and neurochemical mechanisms to feel pain.

Crabs have two main nerve centers, one in the front and one at the back. The dorsal brain is located between the eyes and near the anterior end. The ventral ganglion is located beneath the internal organs, between the legs. 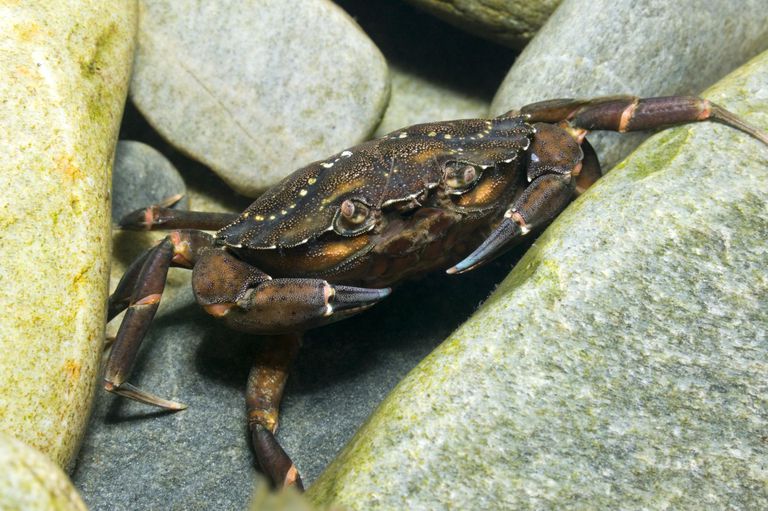 Crabs, like all animals that have nerves, have well- developed senses of sight, smell, taste, and possess the ability to feel and react to pain.

Crabs are capable of learning from their mistakes and retaining that information so that they don’t make the same mistakes again in the future, and they adapt to changes in their environment too.

Sadly, hundreds of millions of crabs are killed every year. There are several methods used to catch crabs, such as setting traps in shallow water and dragging huge nets along the ocean floor.

These methods also capture non-target animals such as birds, fish, and other marine animals termed “by catch” – who are often thrown back into the sea, when they are dead or dying.

Once caught, crabs, who are naturally territorial, are crushed together in
holding containers while they await their fate.

Scared and confused, they often fight with each other after already suffering injuries from rough handling. Many crabs have their legs damaged and torn off when fishers quickly
rip them off from the nets. Countless crabs die each year before they even reach the market.

Like lobsters, crabs are often thrown into pots of scalding hot water and boiled alive. The crabs will fight so hard against a clearly painful death that their claws often break off in their struggle to escape. Some are even electrocuted, some are chopped
up, and others are microwaved – all while they are still conscious. 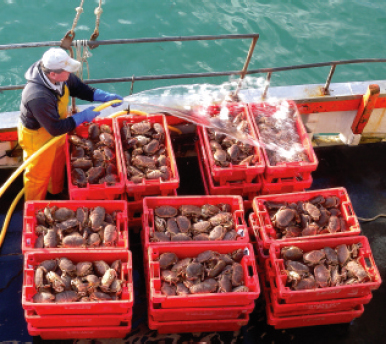 They feel pain. They feel fear. They suffer. Why are these creatures not protected under Irish law?

Lobsters, like dolphins, use complicated
signals to establish social relationships. They sometimes walk hand-in-hand, the old leading the young.

They have compound eyes, consisting of hundreds of lenses joined together on the ends of pair of jointed organs called stalks. 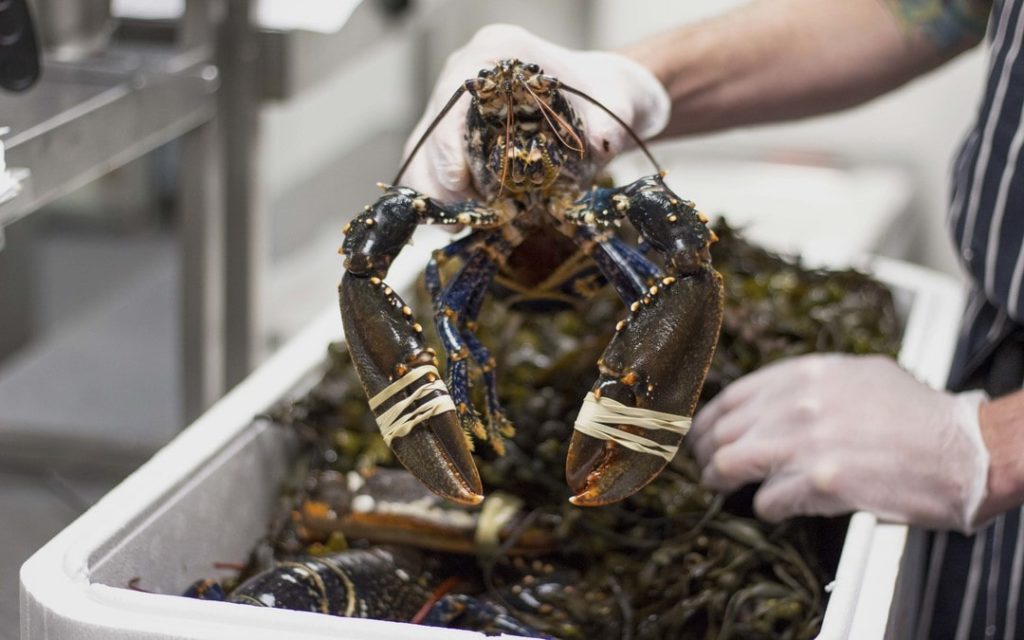 The four small antennae on the front of their heads are used to “smell” their food or chemicals in the water. The tiny sensory hairs along their legs are used to “taste” their food. Lobsters keep their antennae and eye stalks moving constantly to search for food and to watch for enemies.

They take long-distance seasonal journeys and can cover 100 miles or more each year. Just like humans, they also carry their young for nine months, and can live to be more than 100 years old.

When kept in tanks, they suffer from stress associated with confinement, low levels of oxygen, and crowding. They are very sensitive to the quality of water and can die if there is too much waste in it. To prevent the lobsters’ excrement from contaminating the tank water with ammonia, merchants usually won’t feed the lobsters while they are waiting to be bought. As a result of this, lobsters often starve or try to eat each other.

Contrary to claims made by those in the industry, scientists have determined that lobsters, like all animals, can feel pain. Lobsters do not have an automatic nervous system that puts them into a state of shock when they’re harmed. Therefore, lobsters feel excruciating pain when they are being boiled or cut open. When a lobster is dropped into a pot of scalding water, they whip their bodies wildly and scrape the sides of the pot in a desperate attempt to escape. It is an extremely traumatic and barbaric procedure, and they feel the pain until their nervous system is destroyed. Death can take up to 7 minutes.

Lobsters may also be killed or rendered insensate immediately before boiling by a stab into the brain (‘pithing’), in the belief that this will stop suffering. However, a lobster’s brain operates from not one but several ganglia and disabling only the frontal ganglion does not usually result in death or unconsciousness. 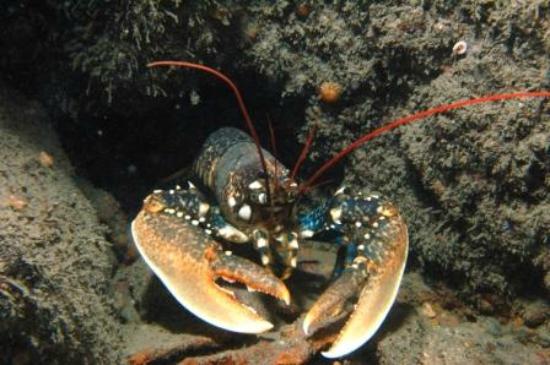 Lobsters liberated from restaurant in Dublin 8th May 2015

On Friday 8th May, activists from the ‘National Animal Rights Association’, ‘Direct Action For Animals’, and the ‘Alliance For Animal Rights’ joined forces for the open rescue of 9 lobsters, from ‘Ka Shing’ restaurant on Wicklow Street in Dublin.

The lobsters, who were going to be boiled alive and eaten, were taken out to Clontarf by the activists afterwards, and set free into the sea.

You can watch the video of their rescue and release here:
https://youtu.be/FnDV7IsRM34

Speaking on behalf of the National Animal Rights Association, Laura Broxson tells us more: “Would you boil a cat or dog alive? No. So why do people think it’s ok to do this to a lobster? They feel pain. They feel fear. They suffer. Yet, over 20million lobsters are killed in this way every year. How is it still legal?”

“We had approached ‘Ka Shing’ restaurant about this issue weeks ago, and handed in leaflets, but to no avail.”

“Right against the front window of the restaurant, lobsters are kept in an over-crowded tank, with no food, and their claws are bound with rubber bands. They remain that way until someone orders them from the menu, and then they are taken out and boiled alive.”

“Lobsters do not have an automatic nervous system that puts them into a state of shock when they’re harmed. They feel the pain until their nervous system is destroyed – which can take up to 7 minutes when being boiled alive.”

“Sometimes ‘pithing’ (a stab into the brain) is used on lobsters, prior to boiling them, in the belief that this renders them brain-dead. But that is not the case. A lobster’s brain operates from not one, but several ganglia and disabling only the frontal ganglion rarely results in unconsciousness.”

“Anyone with a conscience would agree that it is unacceptable for this practice to continue. So, yesterday, we decided to do something about it. Their rescue only took a few minutes, and within an hour they were released into the sea – where we watched each one of them swim away.”

“This is the first time there has been an animal rights ‘open rescue’ in Ireland, and it is also the only public liberation of lobsters that we know about globally. We fully stand by our actions, and wish for the members of the public to reflect on this important issue. We wan’t people to focus on WHY we felt compelled to take matters into our own hands. This was life-or-death situation for these lobsters, so for us, the choice was an easy one to make.”

“During the course of an anti-fur protest the next morning, two of us were approached by Gardai, and have been told charges are being pressed against us for our actions. But whatever happens, it is a very small price to pay for those lobsters’ freedom. We liberated them openly, because we are 100% behind our belief that it was the morally correct thing to do. What we did was an act of compassion, and we have no regrets.”

So, what are we doing about it?

We took part in an open-rescue of live lobsters from a restaurant in Dublin, and have protested and disrupted fishers numerous times by confiscating crustaceans and releasing them back into the sea. This isn't going to stop any time soon - join us next time!

Often the forgotten victims in vegan campaigns, educating people on the fact that crustaceans are sentient is a huge priority. If you would like to help spread awareness on this important issue, let us know and we will send you a leaflet pack.

If fishing was illegal, it would save billions of lives every year. Contact your local TD and council, and ask them get crustacean sentience recognised in Irish law.

We have various campaigns running at any one time. Please click to learn about more issues!