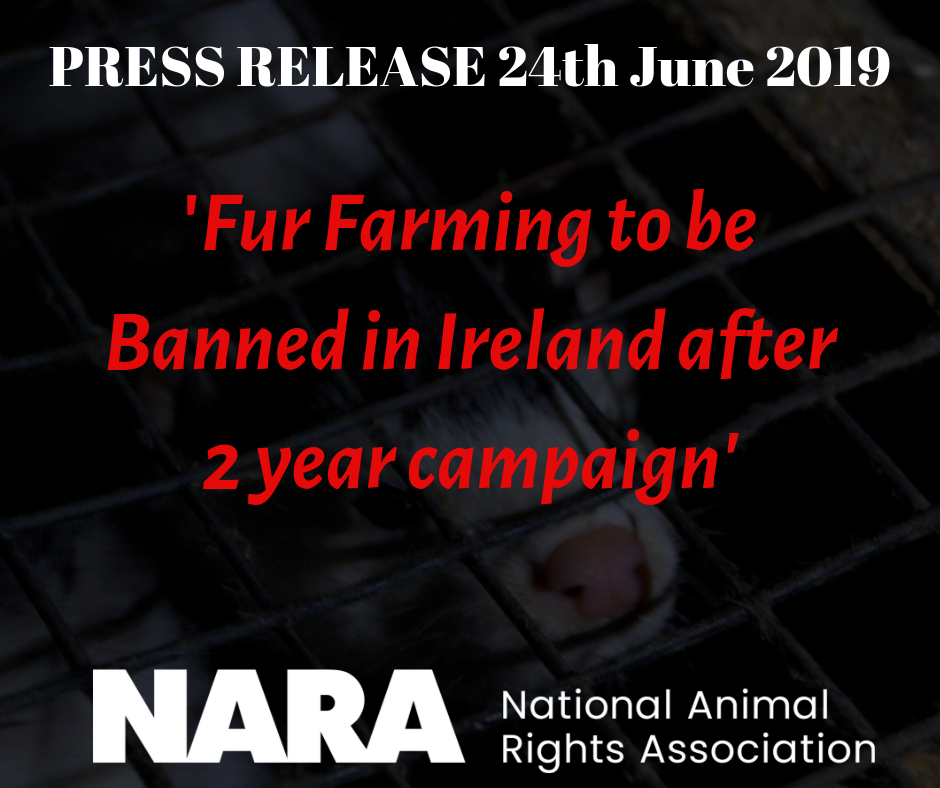 “We are absolutely delighted that, after 2 years of an intense campaign, we can finally say Ireland is officially banning fur farming.” says spokesperson for NARA, Laura Broxson

“Several groups worked really hard on this, not just us. Ban Bloodsports and veghuns were in this from the beginning, with Make Cork Fur Free getting involved last year, as well as support from Respect for Animals in the U.K.”

“It’s been a great team effort, and we are all extremely grateful to Ruth Coppinger TD of Solidarity – The Left Alternative for bringing this to a government level.”

“In 2019, it is unacceptable for the fur industry to continue. It has no place in the modern, progressive and compassionate Ireland that exists today, and we hope that Fine Gael ensure that this industry is swiftly shut down rather than dragging it on in a lengthy phase-out. Ideally, we believe they should discuss the issue with Solidarity first, before putting forward their own legislation.” she added

On discussing the history of NARA’s efforts, Ms. Broxson continued, “Banning fur farming has always been a major goal of ours, and we campaigned very hard in the lead up to proposals which were brought in during the Fianna Fail / Green Party coalition in 2009, and then were obviously devastated when that legislation was subsequently scrapped by Fine Gael in 2012.”

“In March 2017, a documentary was released called “Ireland’s Fur Trade (2017)”, by Mullen Film Productions. This is what kick started the campaign again, and in January 2018, we organised Ireland’s very first ‘March to Ban Fur Farming’, which was a huge success and was supported by a number of TDs. It was shortly after this that Ruth Coppinger TD first approached us regarding proposing the ‘Prohibition of Fur Farming Bill 2018’.

“From that point onward, we travelled the country with our ‘Ban Fur Farming Campaign Tour’ – covering 26 counties and 40 towns, as well as protesting outside the Dept. of Agriculture on Kildare Street every single week.”

“In total, we have organised over 120 events, distributed over 76,000 leaflets, paid for postal leaflet drops to 8000 homes in Dublin, Cork, Kerry, Laois, Donegal & Leitrim, collected thousands of signatures on petitions, and made sure every TD in the country was contacted about this issue – via our daily ‘Action Alerts’, which asked members of the public to email/write/phone a different TD every day.”

“The undercover footage we obtained of Tazetta Fur Farm in Donegal, back in February 2018, was an enormous help to the campaign too and really aided in giving people an insight to the sickening reality of this industry.”

“We would also like to say that support from members of the public has been phenomenal from the start, and we will forever be grateful to each and every person who took the time to contact their TD – without which, none of this would have happened.”

“Now that the campaign is finally about to reach a wonderful conclusion, we look forward to continuing our efforts and starting a brand new campaign very soon.”, she concluded